How Virtual Teams can unleash their potential, with Belbin

If you thought Virtual Teams are a creation of the pandemic...  Think again!
According to a survey by Ernst and Young conducted in 2013, 65% respondents said that virtual interactions have significantly increased over the past few years. 55% respondents agreed that there is a greater geographical distribution of teams.  In recent years, thanks to COVID, virtual interactions have grown exponentially.. almost becoming the norm in many workplaces. The lure of Virtual Teams is not going away too soon!  So, what makes Virtual Teams succeed?

Henrik Bresman, Associate professor of Organizational behaviour at INSEAD believes, when harnessed properly, diversity can do wonders for a virtual team. You can gain a great deal of information and a wider range of views from culturally, behaviorally diverse team members

A 2009 report by WHU-Otto Beisheim School of management states that well-managed virtual teams can even manage to outperform teams located in the same office. A Harvard Business Review report suggested that virtual teams can improve employee productivity up to 43%

What happens when they’re bad?

A 2005 Deloitte study of 'IT projects outsourced to Virtual teams' found that 66% members didn’t deliver properly on client requirements. Another issue is that managers conflate physical presence with greater hard work and dedication. Imagine the impact of such conflation in recent years... Isn't it easy to see one more reason why attrition rates have moved north in recent years?

Sarah O’ Connor, in the Financial Times argues that “economies of agglomeration” affect a company’s bottom line. “When companies cluster physically together, they tend to become more productive”.  When such clustering is challenged by forces that one can't influence, what can Organizations do to help Teams become more productive in a virtual setting?

So how can Virtual Teams overcome their inherent challenges while also reaping the benefits of their co-located peers?

The language of BELBIN Team Roles helps overcome some of the challenges that virtual teams face.

Here are some examples:

It’s important to know the strengths and weaknesses of each team member, in terms of their preferred behavioral contributions to their team. Without this information, it’s not possible to assess how each member can add value to the team.

What purpose does your team intend to achieve? Are the behavioral preferences of the team members consistent with this purpose? How do you know?

What’s an ideal team size? According to Belbin, 4-6 is ideal, because then, no person is accountable and no one has the casting vote when it comes to making important decisions. Decisions must be made through persuasion and consensus. Larger teams need to be broken down into smaller units to function well. Too many cooks spoil the broth and Belbin certainly agrees with that!

What's your team size? How do you know if there are not too many cooks?

An Ernst and Young study found that shared commitment, along with building and sustaining a genuine desire to achieve common goals was more important to virtual teams as compared to their co-located counterparts.

When team members only speak their respective functional languages, they inadvertently walk into a 'us vs them' trap.  Finance vs Marketing, Manufacturing vs Quality,  Sales vs Service.. to pick a few.  Having an unbiased, culturally and functionally neutral behavioral language like Belbin, offers team members a unique lens to explore and discover opportunities in team differences.

What biases does your team struggle with when making sense of each others behavior? How do you know?

Trust is essential for a team to function, more so when it’s a virtual one. Team environment must provide ‘psychological safety’ to its members. People must feel free to talk about issues without fear of judgement. The affable Belbin Team Role language allows people to freely talk about each other’s behavioural preferences and the consequent impact on team performance. When people experience mutual acceptance and appreciation of each other’s behavioural preferences, trust is in the air.

How much do your team members experience mutual acceptance and appreciation? How do you know?

Ernst and Young found that cross-border teams tend to be more sensitive to each other’s needs. That’s probably because they’re aware that there is a greater chance of misapprehension. Belbin helps overcome the obvious issue of isolation through easy, non-confrontational communication. Belbin enables conversations in which, one can simply tell a team member why he thinks the latter is, or is not, the most suitable for a particular task. And do it in ways that foster collaboration and cohesion.

How do you communicate with each other in your team? How much does that foster collaboration and cohesion? How do you know?

An atmosphere of mutual trust and sharp focus on the purpose of interaction, create a space for team members to be ‘actively honest’ with each other. Such honesty and candour helps de-personalise conversations. If problems exist, they get spoken about out in the open.

Belbin Observer Assessments can show how well individual team members show-case their strengths, how they contribute or take away from team performance. While not all problems can be solved merely through Team Roles, it certainly is a good place to start discussions in a non-confrontational manner.

Belbin Observer Assessments can show how well individual team members show-case their strengths, how they contribute or take away from team performance. While not all problems can be solved merely through Team Roles, it certainly is a good place to start discussions in a non-confrontational manner. 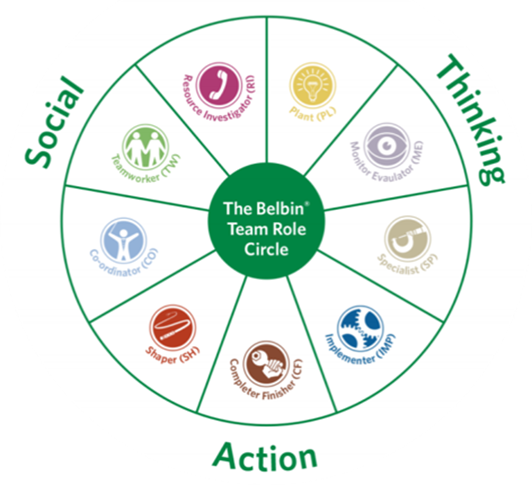 Here are some challenges the nine Team Roles could face in virtual teams:

Though Plants and Specialists like the freedom that comes with being on virtual teams, they can be absent minded and drift away easily. They need to be closely monitored which is difficult in virtual teams.

Monitor Evaluators may seem non-communicative or overly critical of everything. This can bring down the team’s buzz, more so in virtual teams.

Completer Finishers and Shapers are highly task oriented. Shapers can be too harsh sometimes and CFs will obsess over tiny details. In a virtual team scenario such behaviours are sure to create bad chemistry.

Resource Investigators and Team Workers are people-related tea m roles. Virtual teams may prove to be a bit lonely for their taste. Furthermore, RIs, who are known to be chatty will have to learn to listen more in virtual teams.

Coordinators love delegation. In a virtual team, it may not be so easy to delegate tasks. Implementers lay down the rules and are sticklers for lists. Making sure people in remote locations stick to the plan will be a challenge for them.

The beauty of it all is that once all team members become aware of their respective Team Role strengths and allowable weaknesses, they find a way to acknowledge these short-comings and work their way around them. Since a Plant knows that she is a generally lost person, she will try not to drift away too much at work.

What kind of softer challenges do you and your team members face in working together?  How much does the nature of behavioral diversity or the lack of it within the team create those challenges?  How can you overcome these challenges?  How do you know?

Why Belbin for Virtual Teams?

According to experts, virtual teams work even better when they meet from time to time. After all, some human touch is important! This keeps people active, engaged and focused on team goals.

Dr. Meredith Belbin spoke of Virtual Teams way before they became popular. Here’s what he said, even in 1981:

“The essence of a team is that it’s members form a co-operative association through a division of labour that best reflects the contribution that each can make towards the common objective. The members do not need to be present at the same place and at the same time to enable the team to function.” -Dr. Meredith Belbin, Management Teams: Why they Succeed or Fail, 1981

In a BELBIN world, the spotlights and accolades belong to all Teams irrespective of how they are located!

This post was first published as ‘Leverage the potential of virtual teams with Belbin’ by BELBIN Associates – UK, in https://www.belbin.com/

Here are some quick and easy ways for you to get started with BELBIN. Pick the option that best speaks of your interest

BELBIN and the Lencioni Model

BELBIN and Project Aristotle - Everything you need to know

Finding the most 'suitable fit' begins with Belbin

To discover the surprising lever of career success, begin with Belbin

To find the one secret to a Customer centric business focussed organization..